Welcome to the latest post on the Sinadrives blog.

As in any mechanical system, linear axes are subject to a series of mechanical errors which inherently distort positioning to a greater or lesser extent.
At the same time, construction techniques, materials or technologies exist that minimize the effect of these geometric errors. However, in the final analysis, the only way to increase the accuracy of our system is by measuring and compensating the positioning error, either mechanically or electronically.

If we focus on the environmental conditions that may affect the linear motor or axis, such as expansions caused by temperature changes, we can opt to have the system in a room with a controlled temperature or to use materials in which this factor is less significant. For example, we could use steel instead of aluminium, or granite instead of steel to further reduce this effect.

As regards technology, we can use a direct encoder in order to directly measure the position in the moving part of the linear axis. This will eliminate errors introduced by mechanical transmissions on the belt or spindle axes.

In the case of linear motor axes, this option is intrinsically incorporated, greatly simplifying the construction of precision systems.

In order to compensate the error of the linear system, we must have an element that allows us to measure the error accurately and reliably.
Leaving aside probes, ballbar testers and other contact measurement elements used in machine tool calibration, in order to obtain a high precision measurement of linear axes, we must turn to laser technology.

This technology, which has been used for the last 150 years, has evolved not so much in terms of its principle of operation, but rather in respect of how it compensates for environmental factors, enabling it to measure reliably with a resolution of below 1 nm.

The interferometer operates by emitting a monochromatic laser beam, which retains its frequency and wavelength at distances of several metres. The laser beam is split into two: one beam is directed at a stationary measurement optic that is used as a point of reference, while the other beam is directed at a reflective lens that moves together with the linear axis carriage.

By varying the distance between the beam-emitting apparatus and the reflective lens, the lag between the reference wave and the reflected wave also varies, allowing the measurement of the distance travelled.
Additionally, through the use of complementary optics, errors of angularity, straightness and perpendicularity can be measured.

One of the drawbacks of laser technology is that the wavelength is affected by various environmental factors (humidity, air pressure, temperature…). Accordingly, the interferometer is coupled with a compensation unit that measures these meteorological variables and applies the necessary corrections to the measurement.

The system consists of a sphere with reflective lenses (which is placed at the measuring point of the linear axis or of the set of linear axes) and a laser head with two motorized rotation axes.
The position of the sphere is constantly measured. The laser head can be moved to follow the motion of the sphere and draw a three-dimensional map of its movement.

If we add previously measured fixed reference points to this map, we obtain a measurement of the error of positioning, straightness, perpendicularity, pitch and roll of all the axes of the system.
At the expense of reducing precision, which in this system is around 5 um, we can measure multi-axis systems to compensate the misalignments caused by joining two or more axes. Furthermore, we can measure lengths of more than 50 metres. 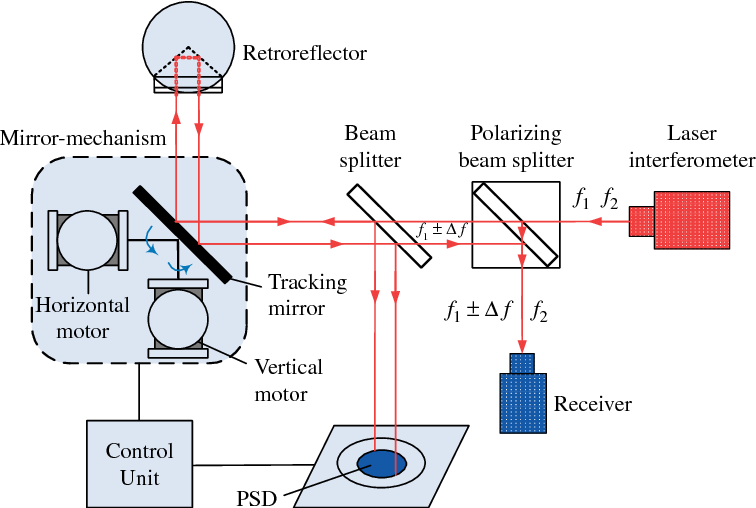 Once the linear axis error has been determined, it is necessary to apply the corresponding compensation corrections.
The mechanics will only be acted upon in the event of major errors. Due to the physical constraints of this system, the lower the magnitude, the higher the cost of compensation. Electronic compensation, on the other hand, offers greater flexibility at a lower cost.

The compensation table makes it possible to define a series of sections of length within the path of the linear axis, and to apply a correction in each section, determined by the previously measured errors.

This can be a fixed correction (in which case a constant value is applied in each section), or an interpolation can be used to determine the error values at intermediate points. Whichever option is chosen, the larger the number of defined sections, the closer we will get to the real value to be compensated.
Compensation tables are defined within the control system of the machine. Nevertheless, in some cases the servodrive that controls each linear axis incorporates this function, thus releasing the CNC from making the overall calculation of the compensation of the linear error.

Thanks to developments in the measurement electronics of encoders, and the use of digital communication protocols, today it is possible to enter this information in the electronics of the encoder itself, thus improving the accuracy of the linear axis and removing the need for subsequent calibration.
It should be noted that the measurement of the error will be conditioned by the environmental characteristics of the manufacturer of the linear axis, and that in all likelihood they will be very different from the environmental conditions of the machine in its final location.

In any case, this calibration will make it possible to eliminate errors to a large extent, especially those derived from mechanical imperfections.

In applications where precision is a value to be considered, the calibration of the linear axes is essential for the correct functioning of the final system.

As such, it is important to select the right elements in the design phase. There are certain technologies that will simplify the calibration process, such as linear axes with a direct measurement system, or servodrivers with compensation tables, and this will result in a shorter set-up time, with the consequent savings in labour costs.

If you have an application in which you’re keen to improve the performance of your machine, be it in terms of speed, dynamics, precision or simply reducing maintenance needs, please contact us.

Our specialists in Direct Drive technology and Linear Modules with linear motor technology will be happy to advise you free of charge.

Draw your own conclusions. Decide which innovation you want to implement in your machine to be competitive. We can help you.