Linear Motors: what are they and which types are there ?

Welcome to yeat another chapter of SINADRIVE’s blog

In recent years, there is a lot of talk about types of linear motors. But what is a linear motor exactly? In this post, we try to give a clear and simple answer to this question.

First, we say that a linear motor’s functioning underlies the same physical principle that in the case of ‘traditional’ linear motors, that is, a force is generated thanks to the passing of electrical power through a magnetic field. This magnetic field is generated via permanent magnets of Neodimium, called also as Rare Earth magnets, which as the post powerful known magnets. The power circulates through a copper thread, which is coiled into several spirals, so that an even larger force is created.

Rotative servomotors are a good means to understand how a linear motor works: let us suppose we can open up a servomotor and extend the magnets to a desired length (see Figure 1).

Figure 1: Showing how to ‘convert’ a rotatitve motor into a linear one.

But, even if we understand its features, we may ask ourselves waht are the advantages of a linear motor when compared to other types of motors.

The first of these advantages is that any type of transmission goes away: pulleys, gears and couplings are all made redundant. Thus, the errors and inaccuracies these elements introduced go away as well resulting in an enhanced precision which is caused by the use of direct-drive transmission systems. Furthermore, thanks to this direct-drive transmission, instant movements at every starting point are possible, since there are no slacks or looseness mechanical elements often cause. This increases the exactitude in the positioning.

Another advantage to underscore is that, as there is no mechanical contact, the system has no wearing to endure and therefore it is maintenance-free. However, other elements of the system do require some maintenance, as it is the case of the linear guides. But, all in all, the system’s maintance is very low.

A third advantage that the different types of  linear motors offer is an extraordinary high dynamic and acceleration, thanks to having done away with all the transmission elements that add inertia to the system.

In the following paragraphs we will shortly comment on the four most important types of electrical motors that nowadays exist: ironcore, ironless, tubular and piezoelectric motors will be briefly reviewed.

The motors possessing an iron core follow the aforementioned scheme, which is the classical one for linear motors: the cupper threads are coiled onto iron sheets, which guide the magnetic field through the coils.

The whole runs on a permanent magents line which give the system a very high density in strength (see Figure 2).

Figure 2: The flow of the magnetic field in an ironcore motor

A parameter to take into account when using these motors is the pulling force. Since the magnets pull the coils’ iron sheets, this generates an additional force which must be added to the weight of the load when designing the rails which will guide the motor.

In the case of these type of motors, there are no iron sheets and instead the coiling is made bewteen the two lines of magnets, which of course results in a higher cost of the final product (see Figure 3) 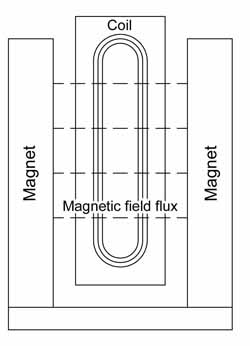 Fig. 3: The magnetic field flow of an iroless motor

In this motor, the pulling force disapperars altogether. And also another negative effect of ironcore motors goes away: it is the cogging. The cogging tends to align the magnets’ poles with the motor’s coil, which generates a force against the movement (or along with it, as the case may be). Due to these two effects having been eliminated, ironless motors may be used in applications requiring very contant speeds.

Tubular motors integrate the magnets into a cyindrical bar which is completely wrapped by the motor’s coil. This, as in the case of ironless motors, completely eliminates the pulling effect.

With this technique, the weight of the magnets is considerably reduced and,
therefore, high dynamics are possible, mainly in short strokes. These are achieved by fastening the motor’s coil and moving the magnets – conversely to the other types of motors, in which the coil moves and the magnets are fastened elements.

Besides, this type of construction allows for a high insulation of the motor so high IP degrees might be obtained or even the ATEX certification.

But not everything is advantages: these motors show limitations as far as strokes are concerned: once the stroke is above above the point where the mangnets’ overweight the coil.

Finally, we want to mention that, inside the gammut of linear motors, there are also the piezoelectric motors.

This technology is based on the deformation experienced by some materials as they receive electrical power. This deformation results into an ultrasonic vibration which makes go the motor forwards or backwards. So, this motor does not use any kind of magnets.

At the level of force, this motor can’t be compared to the other three types, but their attainable levels of miniaturization allows to integrate them into systems where ‘regular’ linear motors would not be an option. I.e., they may be useful in applications where not much force is required but space is a critical factor.

So, one may conclude that, as often is the case in engineering, there aren’t better or worse products, but the important thing is to choose the adequate product for our application. This also applies in the case of linear motors.

As always, you may leave your comments here below or subscribe to our blog so you won’t miss any new chapters.

See you next time!